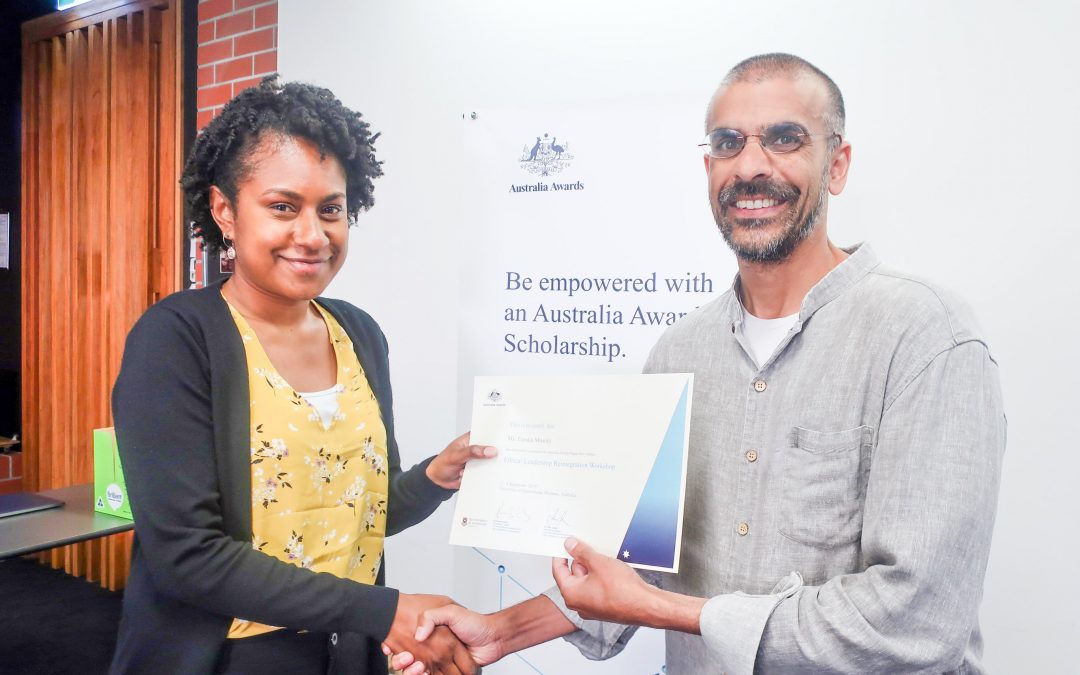 When Euodia Mosoro (pictured above, left) decided to develop her public health expertise through post-graduate study in Australia, she was driven by personal connections as much as professional ones.

Euodia, from East Sepik, describes herself as a second-generation Australia Awards scholar – both her parents were awarded Australian Government scholarships before her.

Euodia says her parents and other female mentors inspired her to apply for a Master of Public Health at The University of Melbourne in 2018.

‘My goal for taking up the Master of Public Health was to come back to PNG and take part in creating evidence-based public health programs, particularly in sexual reproductive health.’

That support network back home – and new connections in Australia – would prove very helpful in dealing with some of the challenges of studying overseas.

‘Settling into a new place, like Melbourne, was a challenge, as was building a new support network,’ Euodia says.

‘The University of Melbourne has an Australia Awards scholars club that provides opportunities for sightseeing and spending time with friends outside of the university. Being part of church communities [was also helpful].

‘Study and workload to me was another challenge, keeping up with assessments as well as extracurricular commitments.’

Here, Euodia drew on advice from her peers and academic staff as well as student support services tailored to Australia Awards scholars.

‘The University of Melbourne has a supplementary assistant fund that allows Australia Awards scholars to seek extra help if needed from tutors with assessments’.

In recognition of her talent and motivation to succeed, Euodia was also awarded the prestigious Allison Sudradjat Prize in 2018. The prize is awarded annually to honour Allison Sudradjat, who championed education for development as a senior Australian official in Indonesia and PNG, and passed away in 2007. With the support of the prize Euodia is currently undertaking a six-month internship with the Australasian Society for HIV Medicine. Euodia is completing the internship remotely.

Euodia is also working on a financial literacy project for women in her mother’s village in East Sepik province.

‘The project involves going back to my mother’s village and setting up a women’s centre where people can come together and take part in financial literary courses. And we’re planning to create an early childhood centre as well. It’s become a really positive experience for me.’

‘I find that I’m already making a positive difference by demonstrating that young women can strive for their goals. And I feel that this inspires other women as well,’ she says.

Australia Awards Scholarships are prestigious international awards offered by the Australian Government to Papua New Guinea’s current and future leaders. Applications for study in 2021 are currently open and will close on 30 June 2020.