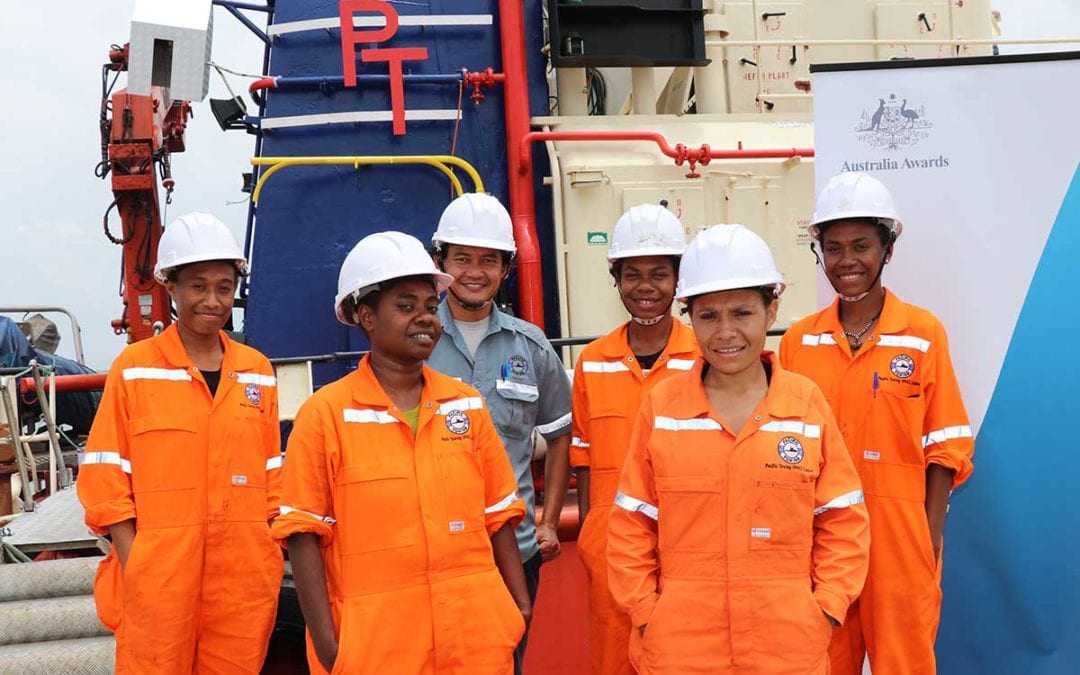 Papua New Guinea saw its first batch of female cadets step on board the MV Szechuen deep-sea vessel last Monday. The five young women training to become Officers of the Watch Deck are pioneers in a groundbreaking partnership between the Australian Government and Steamships Pty Ltd, China Navigation Company and Pacific Towing. “Women bring so much to an industry, and now it is time for the maritime sector to realise this value. That is why I am so very proud that Australia Awards with our private partners are helping to satisfy this need,” said Mr Bruce Davis, Australian High Commissioner at the program launch in Madang earlier this year.

The partners all agreed that the three-year cadetships would be targeted towards women. “When I met the cadets during their induction phase, I was impressed by their enthusiasm and drive to succeed. I am confident that they will benefit from the knowledge and experience of our seafarers on board, as they embark on their careers with us and work towards becoming future ship Captains and Chief Engineers,” said Alistair Skingley, CNCo Company Country Manager of PNG and Solomon Islands.

By partnering with maritime industry stakeholders, the awardees benefit from a combination of study at the PNG Maritime College and 18 months working at sea on international vessels and coastal boats. After their sea time, they return to the College to complete their officer training studies and licensing board testing.

Cadet Training Officer, Kristofer Catoc told the women during their onboard orientation, “You could be future masters. It’s up to you how far you will go. We are here to support your learning.” Cadet Glenda Amu said, “I’m excited to learn more. The way the Chief explains things, makes me want to learn new things.” Her fellow cadet Irma Run added, “I’m nervous, but after hearing from the Chief Officer I’m optimistic. I can do this!”

The maritime sector is of vital importance to Papua New Guinea, with its 6,500 kilometres of coastline and waterways. In 2015 cargo flowing through the country’s more than 20 public and private seaports was estimated by the Observatory of Economic Complexity to have contributed US$9.1b in exports and US$4.54b in imports. However, the maritime industry is male-dominated; women comprise an estimated 2% of the world’s maritime workforce, of which 94% of them work in the cruise and ferries sectors.

In 2017, there were only seven female officers among CNCo’s sea staff. Simon Bennett, the company’s General Manager of Sustainable Development, said, “We have been working to increase the diversity of our staff. When we became aware of the Australia Awards Maritime Scholarships initiative, we saw it as an excellent opportunity that would work to deliver on greater gender balance and simultaneously raise the economic capacity in one of our key stakeholder communities in PNG.”

Selections for the second group of ten women to study for Officer of the Watch Deck and Officer of the Engine Room in the 2019 academic year are currently underway.