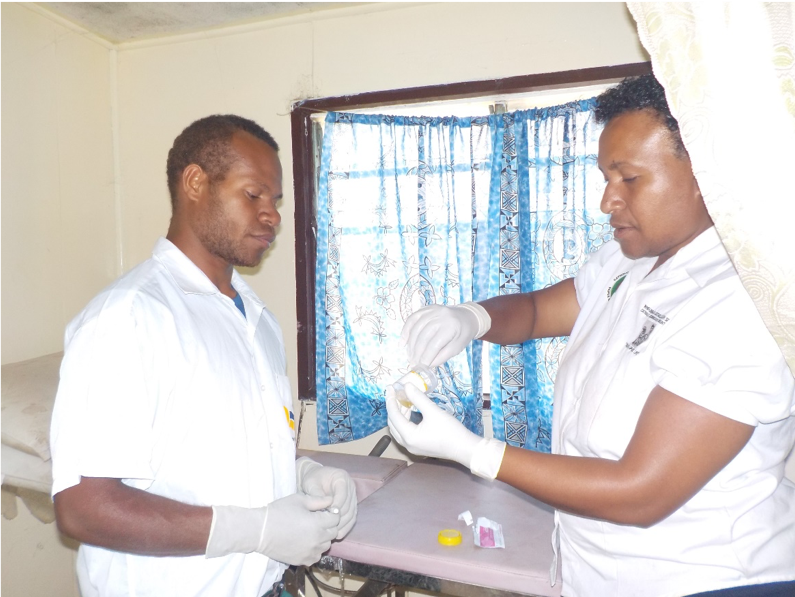 Leadership takes many forms, from holding high office to positions of responsibility in communities, the workplace or family, and much more in between.

Two Australia Awards scholars Janet Towaki and Paula Zebedee Aines (pictured above) are undertaking postgraduate midwifery degrees in Australia. To them leadership means advocating clinical best practice, setting a positive example in the community, and sharing skills and knowledge in Papua New Guinea and beyond.

Janet and Paula both started their careers as nurses in regional areas – Janet at the Daru General Hospital in Western Province and Paula in a rural health facility in Western Highlands Province.

A desire to develop midwifery skills saw them both apply – successfully – to study a Bachelor’s of Midwifery under Australia Awards In-PNG Scholarships. They join the nearly 600 Papua New Guineans who have been awarded such midwifery scholarships to date.

Their impressive journey did not end there.

‘I was given another opportunity by the PNG Department of Health and Australia Awards to continue studies in Australia.  So here I am, almost completing a Master’s degree in Clinical Midwifery Practice at Monash University, Victoria,’ Janet says from her study base in Melbourne.

Janet chose to advance her good leadership in the midwifery profession with research and education.

Paula is completing a Master of Midwifery (Coursework and Research) at Flinders University in Adelaide.

‘I want to contribute to a change in maternal health in three key areas; promoting evidence-based practice using my research skills with the nurses and midwives, advocating for the ethical principles on clinical practice and sharing advanced midwifery information that I learnt, and working with rural women and girls on an economic empowerment project,’ Paula says.

Janet and Paula have found further common ground in Australia. In recognition of their achievements, the two women have been selected for the Australia Awards Women’s Leadership Initiative.

This global initiative supports participants — selected from Australia Awards scholars and alumni — to fulfil their leadership potential and drive big ideas and reforms in their communities.

Leadership skills, mentoring and sharing experiences with others from across the region are all on the agenda.

‘I have been a part of the initiative since February 2019. I have participated in leadership workshops in Canberra and in Queensland. I also have a mentor and access to coaching,’ Janet says.

‘I am interested in the area of sexual and reproductive health so my mentor introduced me to the Multicultural Women’s Health Centre, where she is a Board member. She also introduced me to the Chief Executive Officer of Family Planning Victoria. I had a one-to-one conversation with him and other members of their teams.

I also participated as one of the panel speakers in the recent Research for Development Impact Conference at La Trobe University in Melbourne,’ she adds.

Paula has used her time with the Australia Awards’ Women Leadership Initiative to build her social inclusion skills to explore links between gender-based violence and broader health and social issues.

‘I look at gender-based violence.  In the clinic where I work, many of the presented cases relate to violence,’ Paula says.

‘I have networked with the Pacific Beanies Group.  Australian women knit beanies and I distribute these among Pacific awardees to take back to their countries.  I brought the beanies to PNG to donate to neonatal intensive sections in the hospital and rural health centres in the Highlands.’

Beyond these many practical benefits, Janet and Paula want to effect positive change on a wider scale in Papua New Guinea in the years ahead.

‘Where I work, we do not have any continuing nursing education, so I plan to start up one where nurses, midwives and community health workers can come together for an educational session each week to continue to stay abreast with recent changes and updates of evidence-based practice,’ Janet says.

‘If I can implement my teenage education program, a lot of people will learn through the process, the healthcare providers as well as the recipients and helpers of the program,’ she says.

Paula adds; ‘I would like to encourage more midwifes to apply for the Australia Awards scholarship so that together we can share information, develop a networking system and drive positive change.’

This website uses cookies to improve your experience while you navigate through the website. Out of these, the cookies that are categorized as necessary are stored on your browser as they are essential for the working of basic functionalities of the website. We also use third-party cookies that help us analyze and understand how you use this website. These cookies will be stored in your browser only with your consent. You also have the option to opt-out of these cookies. But opting out of some of these cookies may affect your browsing experience.
Necessary Always Enabled

Any cookies that may not be particularly necessary for the website to function and is used specifically to collect user personal data via analytics, ads, other embedded contents are termed as non-necessary cookies. It is mandatory to procure user consent prior to running these cookies on your website.