Passion recognised with a Queen’s honour

When disability advocate Ipul Powaseu found out that she would be receiving an Order of the British Empire’s (OBE) Queen’s Honour medal, she felt humbled and determined to finish what she started.

Ipul was recognised in October 2021 with a Queen’s Honour medal for her work in the disability sector. Over the past decade Ipul has been advocating for the mainstreaming of disability inclusion and creating opportunities for equal participation for people with disabilities.

“When I was told by my daughter that I was nominated for an OBE award for my work on disability and that I was recognised, I had tears in my eyes.”

Having a physical impairment herself from contracting polio as a child, Ipul has been actively fighting for the rights of people with disabilities nationally, regionally and globally since 2009. Ipul felt so strongly about this cause that in 2010, she left a successful career to become a full-time advocate.

“I had to leave my job. I was working with the National Research Institute, and it was a decision that took a lot of thinking and consultation with my children because they were all at university at the time.”

Ipul’s work to date has involved the establishment of the PNG Assembly of Disabled Persons (PNGADP) organisation, as well as training on leadership and human rights, which led to receiving support from donor agencies. 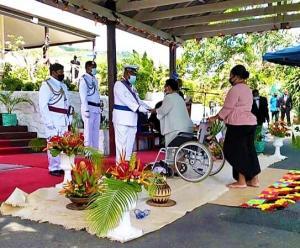 It was this passion for disability inclusion that also led Ipul to pursue PhD studies as an Australia Awards scholar at Deakin University in Melbourne, Australia, which she is currently completing.

“The reason I undertook this PhD is to identify how we can influence social policies in the country so the Government can look into streamlining disability across social policy sectors. I’m in the process of developing the best recommendations that I can provide to the Government.

“The scholarship has provided me with a lot of avenues both in Australia and globally, where I could contribute to a lot of discussions around climate change, but more so on diversity and inclusion. In 2016, I attended the COP22 in Morocco and presented recommendations to the forum’s head of state on climate change and how they can integrate disability.”

Ipul has made many professional links throughout the years and continues to maintain these links with organisations such as Christian Blind Mission Australia and the Australian Disability and Development Consortium. Having received this Queen’s Honour medal, Ipul is keen to use her links to support her plans.

“While the Government has developed policies and legislation, there’s still a lot of work to be done. When I led the PNGADP from 2009 – 2018, a lot of the initiatives that eventuated were through the voice of people with disabilities themselves and the advocacy they did.

Ipul plans to set up a foundation called  Foundation of Hope, to empower people with disabilities and develop entrepreneurial and technical skills so they too can contribute to the development of the country.