Newcrest-funded Australia Awards scholars eager to give back as nurses 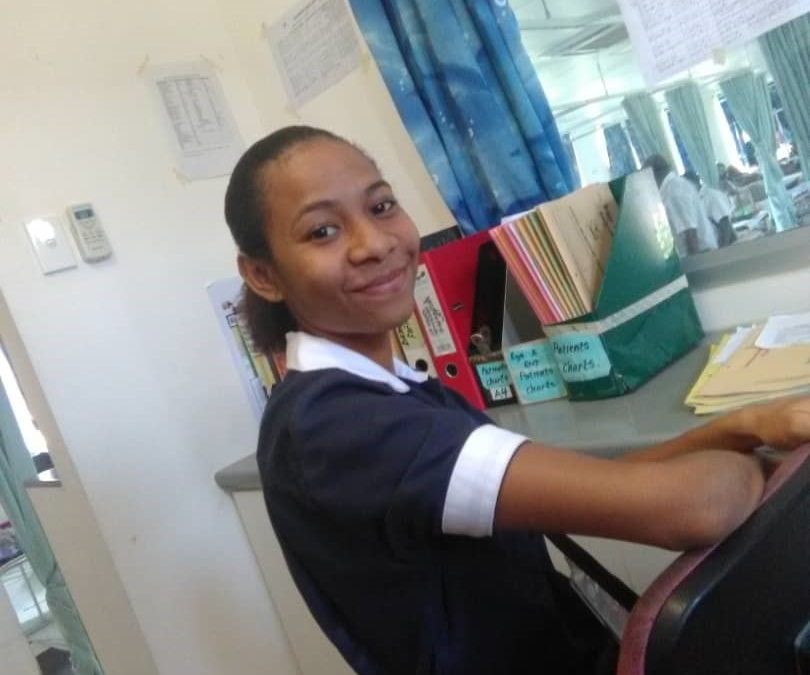 Yolanda Som (pictured above) and Steven Johnson from Morobe Province, are currently in their second year of a Diploma in General Nursing at the Lae School of Nursing. They are part of a cohort of 10 Newcrest-funded awardees currently studying for a nursing qualification through Australia Awards scholarships.

The combination of theory and practice has proven both a welcome challenge and a highlight for Yolanda and Steven as they develop their clinical knowledge and skills.

Yolanda excitedly describes her fascination and enjoyment in learning about the development of a baby throughout pregnancy as part of their obstetrics and gynaecology study.

‘What amazes me is how newborns are formed and how they stay in their mother’s womb for nine months before they are delivered. It’s just amazing and I enjoyed learning about it.’

Steven said he makes an effort to stay on top of his work including theory lessons, including self-evaluations to help him to improve.

And both the awardees say they are working hard to do their best and learn more.

Fellow Newcrest-funded awardee Joshua Kamrai, who is in his first year of the Diploma, has always wanted to become a medical practitioner and is excited to study nursing as a step towards that goal.  Apart from learning nursing concepts, Joshua has also had the opportunity to develop other skills such as computing.

‘Computing was one of our subjects last semester. I didn’t know how to use a computer and I am very happy that through my studies I am now much more proficient.’

Looking beyond their studies, the three awardees agree that giving back to communities, in a practical way, will be a priority.

Yolanda hopes to work at a hospital or health centre to give back to the community by using what she has learned. ‘That’s what nurses do, we save the lives of patients.’

Steven shares the same sentiment.  ‘Starting with the most rural areas of this nation, I plan to give health education and educate mothers on women’s health. Not only that but also how to look after themselves and their children.’

Since 2017 Australia Awards has partnered with Newcrest Mining to contribute to improved service delivery in the health sector through the provision of nursing and midwifery scholarships in Morobe and New Ireland provinces.

Engagement with the private sector to support Papua New Guinea’s growth, employment and future prosperity is a fundamental part of the Australian Government’s activities in PNG.  Such engagement supports Australia’s enduring partnership with Papua New Guinea and supports skills development and service delivery in priority areas for the Governments of PNG and Australia.