Kumuno fulfils ambition to make a difference as a nurse 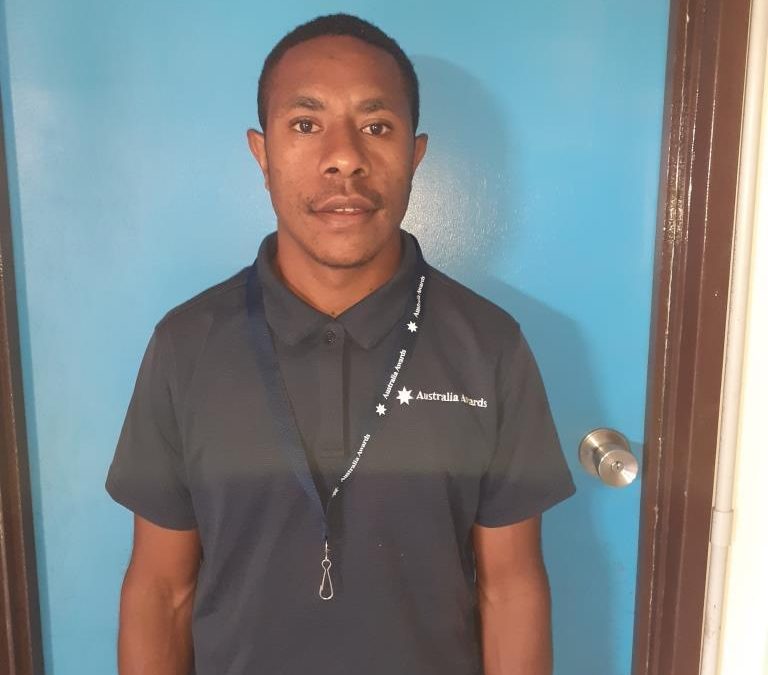 For Kumuno Cliff, wanting to give back to the community in a tangible way has been a motivating factor for many years – and a key reason why he applied for an Australia Awards In-PNG Scholarship in 2018.

Fast forward to today, and Kumuno is clearly on his way to fulfilling his ambition, as a second year student in the Diploma in General Nursing at Lae School of Nursing.  Kumuno is one of three Australia Awards scholars sponsored by Steamships to study this course.

After a first year which focused strongly on theory, Kumuno says he is enjoying the second year’s hands-on elements and applying what he has learned so far.

‘I do some advance procedures that give me experience. Procedures such as injecting and handling tubes and assessing a patient’s mental state,’ he says.

Another highlight has been learning about integrated management of child patients.

‘There are 14 steps to identifying and diagnosing a child. Some of the illnesses that I’ve diagnosed a child with were malnutrition, cough, malaria, pneumonia.

‘I’m progressing well this semester and I am looking forward to doing my semester exams.’

Kumuno sees his future role as a fully qualified nurse who plays a vital role in society. He plans to work in either a hospital or at a rural or regional health centre, where he will be able to implement his skills and provide health care to the community.

‘In rural areas, there are [fewer] doctors. But there are [more] nurses. Nurses provide primary and holistic health care to patients … and even comfort and reassurance.’

Australia Awards partners with Steamships to contribute to improved service delivery in the health sector through the provision of nursing scholarships for study in PNG.  Engagement with the private sector to support Papua New Guinea’s economic growth and human development is a priority for the Australian Government in PNG.

This website uses cookies to improve your experience while you navigate through the website. Out of these, the cookies that are categorized as necessary are stored on your browser as they are essential for the working of basic functionalities of the website. We also use third-party cookies that help us analyze and understand how you use this website. These cookies will be stored in your browser only with your consent. You also have the option to opt-out of these cookies. But opting out of some of these cookies may affect your browsing experience.
Necessary Always Enabled

Any cookies that may not be particularly necessary for the website to function and is used specifically to collect user personal data via analytics, ads, other embedded contents are termed as non-necessary cookies. It is mandatory to procure user consent prior to running these cookies on your website.