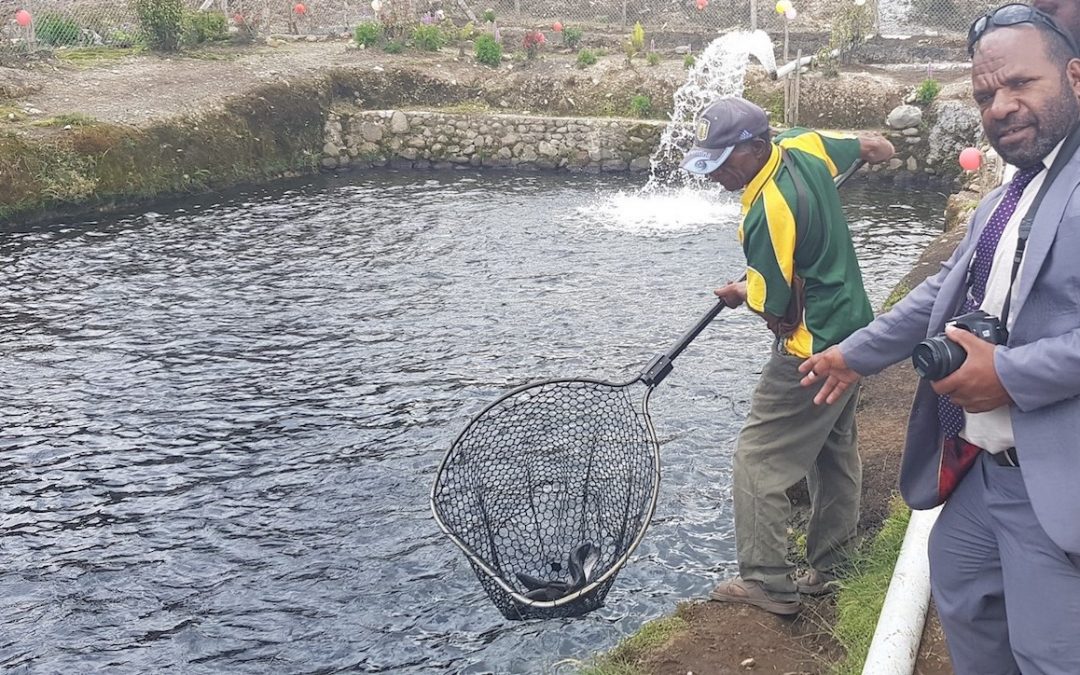 ‘We have a vision.  We would like to see ourselves as a source of protein, a source of income and of employment opportunities for the community,’ Tipi says.

Tipi is explaining his motivations during a visit to the Mt Giluwe Rainbow Trout Farm, in the picturesque foothills of PNG’s second highest mountain.

Tipi and his business partners set up the farm in 2010 to take advantage of the area’s rich agricultural potential – and share benefits with the community.

‘We saw we had a very nice river system, pristine water you can drink straight from, that we weren’t taking advantage of,’ Tipi says.

So Tipi and a small group of partners got to work.

‘There was no road access back then,’ Tipi says.  ‘We had to dig the first channel [of the fish farm] with spades.’

A decade on the Mt Giluwe Rainbow Trout Farm, located on the border of Western and Southern Highlands Provinces, has been transformed.

It currently houses 40,000 rainbow trout, including ponds for adult fish and a separate hatchery.

‘This is the largest inland hatchery and farm at a commercial level in PNG,’ Tipi says.

‘We’ve got the potential to reach about 1.2 million fish stock in the next few years.’

In addition to his diverse career – from hospitality and education to his current role as Human Resources Advisor at the Southern Highlands Provincial Administration – Tipi draws on his experiences as an Australia Awards scholar to drive the farm forward.

Tipi completed an Australia Awards Short Course in 2015, achieving a Certificate IV in Project Management Practice from the Kangan Institute in Victoria.

‘When I was in Melbourne, I had the chance to visit one of the trout farms during the course.
I learned important things there and realised I had one of the best places [for fish farming] in PNG.’

‘We’ve been developing our capacity in terms of managing the project … so we achieve our results within time and budget.

‘Those are some of the skills I developed during the Australia Awards Short Course.’

The farm – run by the Mt Giluwe Kalopa Cooperative Society and its 2,500 members – sells its products locally, returning profits to communities.  It also receives technical and logistical support from PNG’s National Fisheries Authority.

‘People have changed their preference for protein and many now prefer fish – it’s healthy and a good source of protein,’ he says.

In recognition of his efforts and community profile, Tipi was recently nominated as a Papua New Guinea Australia Alumni Association (PNGAAA) Ambassador for Southern Highlands Province.

One of 25 PNGAAA Ambassadors appointed across PNG, Tipi will help promote the 5,000-member organisation and its contribution to sustainable development and the PNG-Australia Partnership.

Tipi welcomes the accolade, but stresses the Mt Giluwe Rainbow Trout Farm is about more than any one person.

‘This project is purely owned by the community.  I became the conduit to transfer my knowledge to the community,’ he says.

‘The plan is to take it to the next level, from small-scale to a SME so we’ll be functioning as a larger business unit.

‘Basically the community is in focus.’