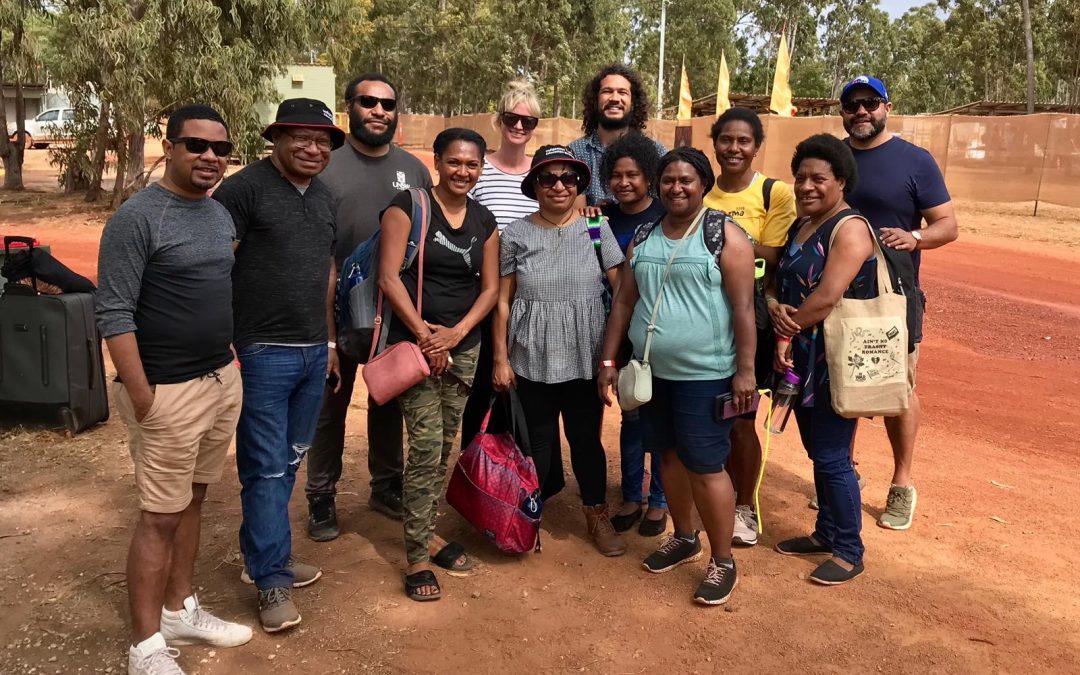 Ten Australia Awards scholars from Papua New Guinea studying at tertiary institutions across Australia gathered in Gulkula, a cultural gathering place for the Gumatj clan of north-east Arnhem, to take part in the iconic festival.

All awardees came to the festival to immerse themselves in Indigenous culture, to listen, to observe and to learn.

Awardees took part in guided country walks, Indigenous astronomy tours and Yolngu kinship workshops. They shared meals with Yolngu community members and danced with Yolngu tribes at the evening bunggul, a traditional ceremonial dance, sharing in ceremonies that link Yolngu to their land and to each other.

For many of the Australia Awards participants, Garma highlighted the importance of cultural identity, of knowing who you are and your cultural heritage.

‘Garma was an awesome event which not only provided an avenue to be educated about Indigenous Australia, but also to learn more about yourself. It has grounded me’, said Gima Kilamanu-Naime, who is studying a Master of Innovation and Entrepreneurship at the University of Adelaide.

Fellow scholar and Master of International Public Health / Master of Health Management student Elijah John, while reflecting on his Garma experience said, ‘I am inspired to ensure my community preserves our culture and heritage as it is our identity’.

The importance of education in preserving Indigenous culture was highlighted and exemplified throughout the festival in both the cultural activities and key forum.

Awardees reflected on the importance of families in transmitting culture, learning about the ‘families as first teachers’ concept and Northern Territory Government program of the same name, delivering early learning and family support for remote Indigenous families.

Rosa Sukurini Puu, a PhD scholar undertaking an ethnographic study on girls’ education in Papua New Guinea at the University of Queensland, was moved to think about how she could take a similar approach to her family and community.

Rosa was also inspired by the University of Melbourne’s Indigenous Studies Unit work to empower teachers to integrate Aboriginal and Torres Strait Islander perspectives in their teaching through the development and sharing of Indigenous Knowledge Resources.

The leadership role of Indigenous women in education was highlighted through the event, particularly the education forum.

‘It was inspiring to see women taking the lead in education and being role models within their community amidst all the struggles they have been through,’ said Elizabeth Olaba, who is studying a Master of Education at the University of the Sunshine Coast.

‘The motivation I personally got from their success stories has encouraged me to persevere and to keep doing the best for the children in my community. I will work to inspire other young females who wish to take leadership roles in Papua New Guinea as we are the path to a brighter future’.

Fellow scholar Michelle Silip, who is studying for a Master of Information Technology (Enterprise Management at the University of South Australia), echoed this positive sentiment.

‘The Garma 2019 experience has achieved its aim to enrich the on-award experience,’ Michelle said.

She adds, ‘It has enriched our knowledge on an aspect of our make up which is culture. We will go back home enriched by a better, improved perspective on cultural heritage’.