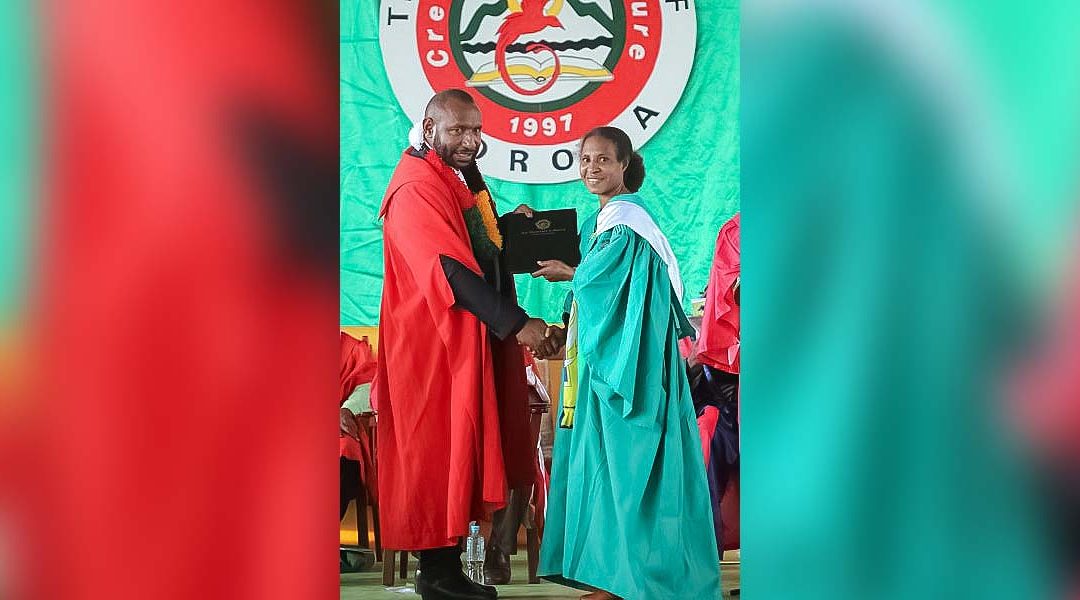 Lucy Gawai, Principal of Kapuna Community Health Worker Training School, recently graduated with a Bachelor of Midwifery from the University of Goroka as an Australia Awards scholar and was recognised as the top student in her class and the second for overall excellence across the School of Science and Technology.

Lucy chose to study midwifery to qualify to teach Obstetrics and Gynaecology. Lucy says: “The majority of students coming for community health worker training are from very remote parts of Gulf and other provinces, where there are no doctors, midwives or nursing officers. So, community health workers are there to save lives, they need to be given appropriate information and training to practice safely.”

Despite the successful outcome of Lucy’s studies, there was a brief moment when they almost did not begin. Lucy had initially withdrawn from the course as her role as Principal, which she had begun a little over 15 months prior was very demanding. She says that the person who called her to offer her the study opportunity gave her five minutes to rethink her decision.

“In that five minutes I consulted the Lord and he spoke clearly to me that ‘this is all my doing so just say yes, I will take care of the rest of your problems, just trust me’. So, I confidently said ‘yes, l accept the offer’. I returned to Kapuna, sorted out my responsibilities and all went well with God by my side and off I went for my one and half years’ study.”

Although Lucy cared for her baby while studying, she says, “One thing that challenged me during my studies was that, if the Gulf Christian Services Executive, my colleagues and my husband could release me for studies, I had to make them proud! I had to do my very best academically.” Lucy aimed to get the academic excellence award for the Bachelor of Midwifery as well as the school’s overall excellence award during her two years of study, and she achieved both.

Since 2012, Australia Awards PNG has offered 191 Bachelor of Midwifery Scholarships at the University of Goroka to women and men from 19 of Papua New Guinea’s provinces, and more than 600 midwifery scholarships across the five midwifery training institutions in PNG.