A book drive for remote schools 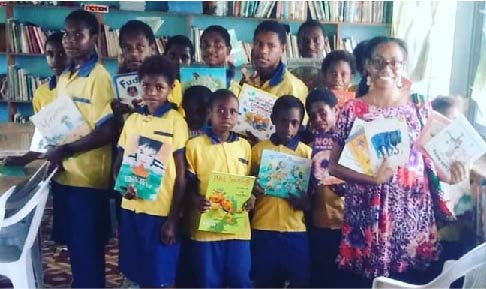 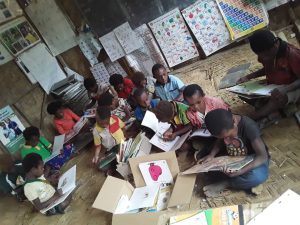 aqua-culture resource books to the fish farming communities. Seeing the opportunity presented on these trips, Lina planned to supply books to remote schools that did not have access to basic learning resources.

It was later in 2014 that she made a commitment to continue donating books after seeing the conditions of Murik Lake primary school on a work trip to East Sepik Province. The school offered its two sago thatched classrooms as accommodation to the NFA team. Lina discovered that the classrooms facilitating learning from elementary level to grade five, lacked teaching material and had only one teacher.

Returning to Port Moresby, Lina sought financial support from the NFA management and South Sea Tuna Corporation for the book drive. With both organisations’ support, Lina purchased five Library Re-establishment Kits. She donated one to Murik Lake Primary school and the others to various remote schools in East Sepik and the Highlands region.

With help from friends and colleagues, Lina distributed books to remote schools, however funding was a challenge. Eligible for an Australia Awards PNG alumni grant, Lina applied for a K30,000 book drive grant in 2018. Being the largest funding support, the book drive received, Lina purchased K30,000 worth of Library Re-establishment Kits (Kit 2), each containing 500 books and teacher aid material for schools in Chimbu, East Sepik, Enga and Jiwaka provinces.

While schools like Paparom Primary School in East Sepik, reported that the gifted books were the first materials

their libraries had received after housing empty shelves, schools like Yuo Primary School also in East Sepik, were inspired to build school libraries after receiving the kits.

When asked to comment on the importance of International Literacy Day, Linda had this to say; “Literacy is very important. You cannot do math without reading for instance. Reading and comprehension are very important. Yanguru AOG (Assembly of God) Primary school have this very good library program where they encourage kids to read during lunch break. They are even allowed to borrow books. If a kid is doing well, they pair them up with someone who is not good at reading to help them to read. Encouraging kids to read at a very early age is very important for them.”

Lina continues to donate books to remote schools that seek her assistance and is presently sourcing funding to support future book drives.